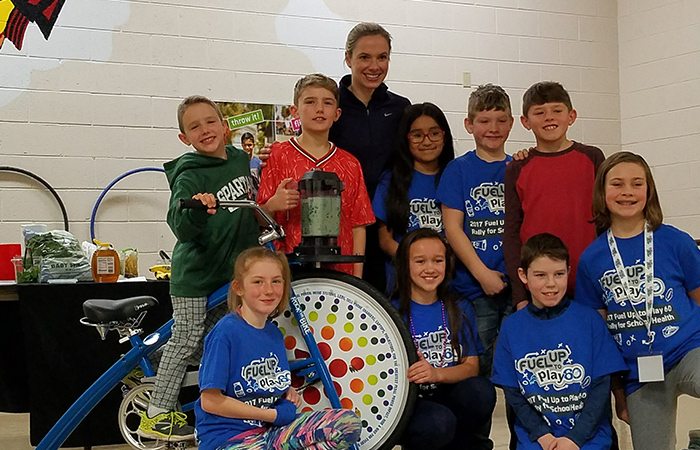 When we were at the National Milk Producer Federation meeting last fall, Max entered a drawing for a smoothie bike … and he won!

A smoothie bike is a bike that powers a blender on the front of it.  Cole, Max, and Kris put ours together this week – a definite benefit of my kids growing up is that they are perfectly capable of doing things like this that I don’t want to do – and we took it in to their school.

After Maddie talked about dairy farms, milk, and the smoothie bike, the curtain opened on Max and the cow (Levi, a 5th grader) riding away!

(Are smoothie bikes a thing around you?  I’ve been aware of them for about four years now when we had one at a class picnic, but when I mentioned it to some friends, they had never heard of it.  I also thought everyone picked up change and found I was wrong – more for me!)

Two-time Olympian gold medalist Lindsay Tarpley used the ingredients of the smoothie to represent different parts of what it takes to succeed – hard work, perseverance, confidence, and sacrifice.

She also had St Johns High School soccer players there and had them do cool things soccer players do, like hit it on their legs and feet and do fancy footwork.  (One of them, Brian, is Cole’s drum teacher and a nice guy, so that was a nice surprise!) 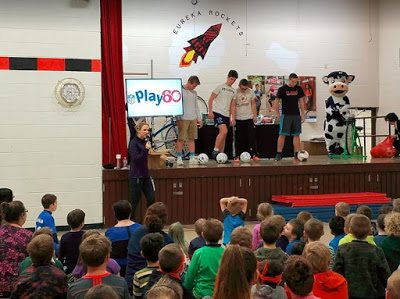 She talked all about her journey in making it to the Olympics – and scoring a goal in the gold medal game! She did a great job tying it all together and stressed that no matter what the kids wanted to do – hard work would get them there.

She also answered a lot of questions. They were pre-selected ahead of time and read by the fifth graders, so they were good ones. (You’ve seen painful on-the-spot questions by little kids, right? This avoided that.) 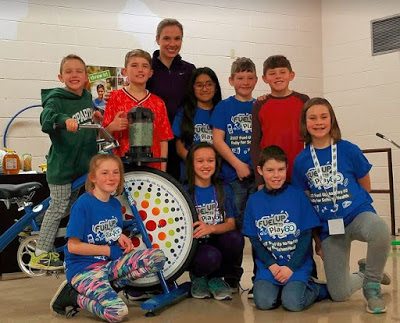 She brought her gold medals from Athens and Beijing with her … so cool. 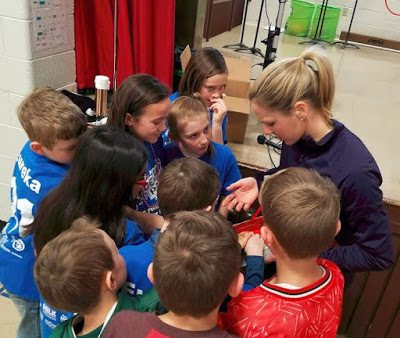 Then in gym class, the kids got to make and drink milk/yogurt/strawberry/banana smoothies… 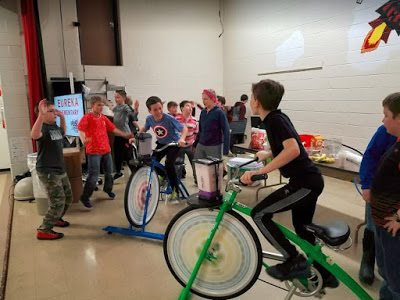 And in lunch they had milk/yogurt/honey/pineapple/spinach smoothies! 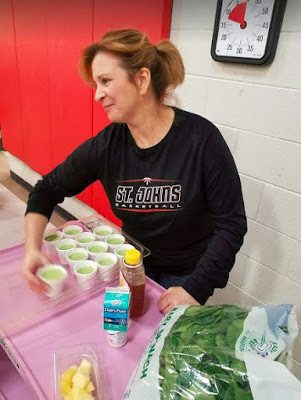 They loved them. (It was class color day in school today in case you wonder why all the 5th grade boys are dressed alike. In pink.) 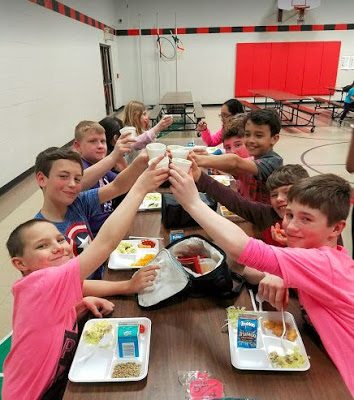 Thank you to the United Dairy Industry of Michigan for Lindsay Tarpley, for the smoothie bike drawing, and for the school smoothies, full of dairy! It was a great day.

What’s next after smoothie bikes? Bikes that churn butter? Bikes that make ICE CREAM? I look to you, bike manufacturers. We’ll get the milk, you do the rest. 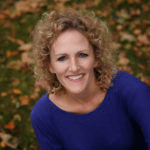 Eleven years ago, Carla Wardin and her husband Kris quit their corporate jobs and bought Carla’s parents’ dairy farm. She is the sixth generation to farm in St Johns, Michigan, where they milk 400 cows and grow crops to feed their cattle on 850 acres of corn, alfalfa, and pasture. Carla works for the U.S. Farmers & Ranchers Alliance and the Michigan Foundation for Agriculture. She’s a township supervisor in her community, is a Team Chocolate Milk runner, and enjoys teaching today’s youth through volunteer work, substitute teaching, and swimming lessons. Before returning to the farm, Carla got her MA from Michigan State University in English Literature, taught college composition, and worked in marketing for Caterpillar and TechSmith. She writes about the farm at Truth or Dairy, and she’s the author of three books. The couple is also raising three sons – 10 year-old twins and a 7-year-old.