Great things are happening in schools at breakfast time! National School Breakfast Week was celebrated March 7-11, 2016, as was discussed in a previous blog post. Many schools all over Michigan and the United States held special promotions in their schools.

“We are always promoting breakfast at our school,” said Kay Walters from Lawton Community Schools. They have breakfast available at their school until lunch is served, so kids are able to get food if they didn’t at home, even if they are late.  They had an Oatmeal Mix-in Day during National School Breakfast Week. It included a bowl of oatmeal with fresh fruit, granola and yogurt for the students to choose from and mix in.  “It is wildly popular,” said Walters. “About a third of the kids that eat breakfast on that day choose to eat the oatmeal.” 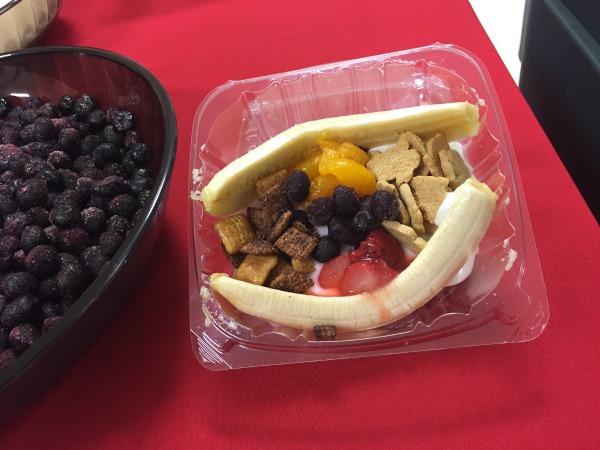 Wayland Union Schools also offered a special menu during National School Breakfast Week: a Banana Split Yogurt Bar. They used strawberry and vanilla yogurt and gave students topping options such as: graham crackers, 100 calorie snack packs, rice square cereal, homemade granola, fresh strawberries, fresh blueberries and mandarin oranges. Sarah Hawkins, Wayland Union’s director of dining services, said, “The students were so excited to have a ‘banana split’ for breakfast and the best part was the fact that it was healthy wasn’t lost on them. So many told me that it was the most delicious healthy breakfast they’ve ever had!”

Another menu promotion Wayland Union ran was free hot chocolate with breakfast. They heated fat-free chocolate milk and served it as hot chocolate. Hawkins reports their breakfast counts increased by 35% at Baker Elementary School and continued that way for the week. Overall their district saw a 23% increase in breakfast participation during National School Breakfast Week! 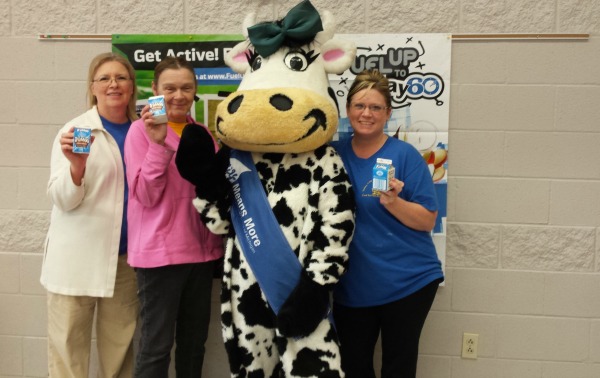 An event or activity is another popular way to create excitement over school breakfast. Roxanne Pierce, food service director at Imlay City borrowed a cow costume from the United Dairy Industry of Michigan (UDIM). “We had our ‘cow’ greet students first thing in the morning as they were arriving on the busses at Weston Elementary School,” said Pierce. “The students were so excited and our breakfast participation went up by 50 students!!” The cow visited their other school buildings, too. “Our high school students are allowed their cell phones during the day, so she was the subject of quite a few selfies,” said Pierce.

Giveaways and prize drawings are popular ways to generate interest in school meals. For National School Breakfast Week, UDIM provided school districts with over 180,000 stickers that schools gave to students who ate breakfast and participated in activities.

The result of inviting parents was an increased awareness of the breakfast program, and more students ate breakfast. “We saw 10 more kids per building eating breakfast,” said Alley, “and it has continued after the promotional week.” “Some parents didn’t even realize we served breakfast,” she said. Students also enjoyed doing breakfast activity sheets for prizes.

At Coopersville High School, Chef Edriese, Chartwells’ corporate chef, came in at lunch and showcased the options available at breakfast time.  “It was a huge success,” said Alley. “We had samples of breakfast sandwiches we already serve each day, and some students had no clue they were available. We also tested a breakfast burrito bar,” Alley continued. “They loved it and we will be adding it to the menu.”

Lakeview School District held their special event in the virtual world of social media. Sherry Palmer, food service secretary at Lakeview helped manage a Twitter contest for middle and high school students.  They were asked to tweet pictures of their breakfast for a weekly prize using #lmsbreakfastrocks. There was an increase of over 675 breakfasts district wide. It was so popular they had to continue it for the whole month of March, instead of just National School Breakfast Week. “I post a lot to our Food Service Facebook page,” said Palmer, “but this was my first venture on Twitter.”

Featuring special yogurt bars and taking advantage of resources UDIM makes available are great ways to promote school breakfast. There are successful examples all over the state of how to get more students to eat breakfast at school. 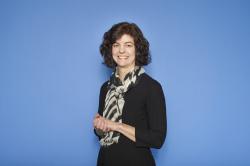 Emily is a Youth Wellness Manager at UDIM and loves school meals. She has worked in and around school food service her entire career. She is also a dietitian, wife and mother of 2 boys.