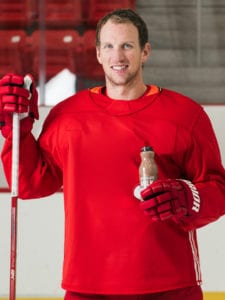 Justin Abdelkader is known for his grit and toughness as a hockey left wing and alternate captain for the Detroit Red Wings, but there is so much more to him, including his passion for childhood nutrition and education.

Justin is a graduate of Mona Shores High School in Muskegon and played hockey for Michigan State University. Playing for the Detroit Red Wings since 2010, Justin was the first rookie to score goals in back to back Stanley Cup finals games. And on October 9th, 2015, He was the second player to score a hat trick in a season opener. For more information on Abdelkader’s stats check out his hockey career here.

Seven years after turning pro, Abdelkader earned his Bachelor of Arts in General Management from Michigan State’s Eli Broad College of Business in 2015. As a professional athlete, Justin knows the importance of education and a healthy lifestyle, especially at a young age. He advocates for good nutrition and the key role dairy plays in a child’s growth and development. Justin makes a big effort to be involved with children and education. It is even more important to him as a new father! This year marks the sixth year of Red Wings for Reading which is a program presented by Michigan Education Savings Program (MESP). To learn more about the Red Wings for Reading program click here.

“As an athlete, I know how important nutrition is to my daily performance, so it’s difficult to imagine how a kid can grow and learn without knowing if they will have nutritious food to help them be their best,” Justin Abdelkader said. “I’m partnering with Milk Means More to promote good nutrition and health so children can be their best.”