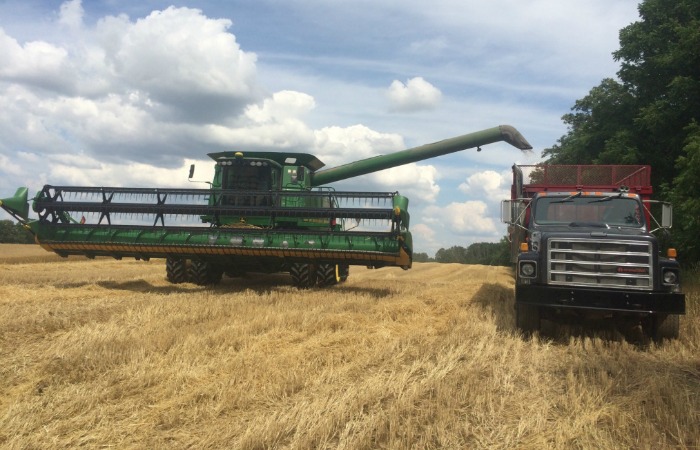 Wheat harvest took place a few weeks ago. I absolutely love wheat, it is so pretty when it dries into that golden color and it makes for really great pictures.

I also like wheat because it tastes good!!  Wheat is used to make all sorts of different products, the most common being flour for bread. It is also used for pastas, and my favorite: cake! Haha. We plant winter wheat, which means that it gets planted in the fall after we harvest the corn from the field, and it is hardy enough to survive winter in its dormancy period and gets harvested in the summer after it grows in the spring. 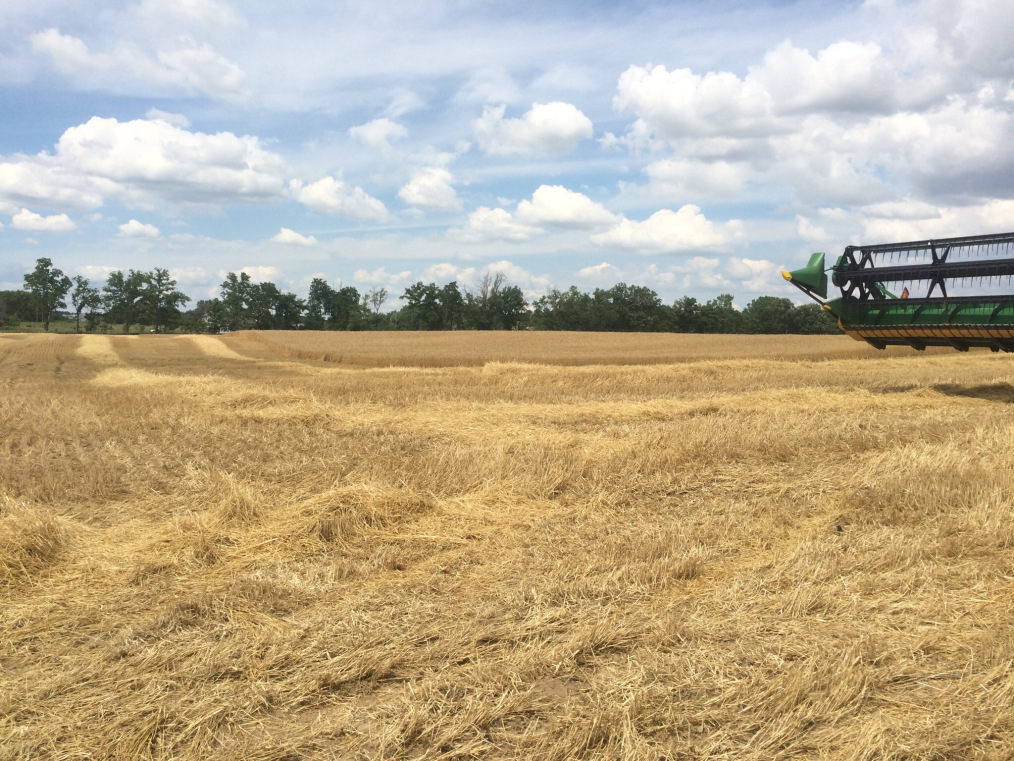 The combine goes through the field and takes the seed out of the heads of the plant.

We take the wheat to the local elevator where a probe comes down and takes a sample of the wheat we have hauled in the truck (yes, like you see on the alien movies). A person runs the sample to get the moisture content to see if any drying needs to occur, and checks for foreign matter and vomitoxin. We try to get optimal moisture content in our wheat so that we don’t have to pay the elevator to dry it for us because that is expensive!  Foreign matter can be anything from a couple beetles to a bolt that came off of the combine (we’ve never had that happen but I guess it could!), we also get docked for this. Vomitoxin – a big scary word – is a fungus that grows on the wheat that is toxic if consumed in extremely large quantities (our payment for the crop also gets docked for this).

The mill separates out all of the good wheat to be used for human or animal consumption from the bad wheat. After we are probed (I’m playing the scary alien song in my head), then we have to figure out how much wheat we have on our truck. We drive across a large scale that takes our weight and weighs the empty truck when it leaves, too. I always try to suck it in they weigh us J

We then drive up to a big pit where we dump the wheat that gets “sucked up,” usually by an auger, and put into big silver storage bins. After all of that we get weighed on the way out and they figure out how much wheat and how much they docked us to come up with our paycheck. All of this is done electronically with a card that gets swiped on the way in and out. Isn’t technology great?

Our cows do not eat the wheat, but they do eat the straw which is the stalk that’s left after the combine leaves. After the wheat is taken off the stalk, there is leftover stalk in the field. We bale the straw using a machine that picks it up off the ground, and shapes it into those big round or square bales and ties them with baler twine.

After that machine goes through – called a baler – we then have to pick up all of the bales and stack them at the farm to feed and bed our cows with for the whole year. We were lucky this year to have a large straw crop and will probably have extra which will help if we have a poor crop year in the future.

Kristi Keilen grew up in Grand Ledge, Michigan and attended Michigan State University where she earned a Bachelors in Animal Science and Agronomy. She lives in Westphalia, Michigan with husband Matthew and son Brody. Along with their partners in the business, they milk 450 cows and farm 1,900 acres. Their heifers are raised on a separate facility about 20 miles away. Kristi works for Harvey's Milling Company in Dairy Nutrition and Sales. She is very involved in their county Farm Bureau, and loves to promote ag in her spare time. Kristi loves farming, the family history behind the farm, and seeing how things have grown and adapted since the farm was founded.