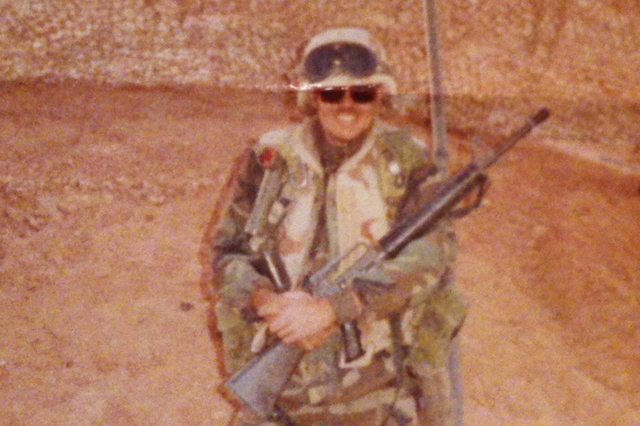 I’ve done three deployments overseas and was able to take everyone there, and bring everyone home. If you want to talk about a career highlight, that’s got to be it. Today, I care for my dairy cows on my family’s farm near Leslie. From Patriot Missiles and Apache helicopters to the farmland of Michigan, it’s a journey that still reminds me of what is important.

When I turned 18 my father advised me to “go find a job.” It was 1984 and the weak farming economy didn’t provide enough revenue to support me and my parents. I joined the U.S. Army and quickly became a light wheel mechanic at Fort Ord in Monterey, California. From there, I received Advanced Individual Training, which took me to Georgia where I worked in maintenance on tanks at Fort Stewart.

In 1986, I married Joan, a “Navy brat,” and we had three children. I was there for each birth. Our daughter lives four miles down the road, and our oldest son works on the farm. Our youngest son is serving his ninth year in the military.

After moving around the country, I retired from the military in 2004 after serving our country for 20 years. Whether it’s the military or farming, you need the same work ethic. There’s no clock on a dairy farm. In the military, we worked to a standard, not to a time. If the job wasn’t done, you stayed. It’s also what you do on the farm. If the weather is closing in and you have to get crops out of the field, you work until you can’t work anymore.

Following military retirement, I worked for my dad for five years. In 2009, on my birthday, my parents transferred the farm over to me. My dad still works every day. Anyone who works with their family knows that even though I’m the manager, he is still in charge. He’s a wise advisor to have on hand. I often hear my dad say, “I’m not going to tell you what to do, but if I were you, I’d do this.” 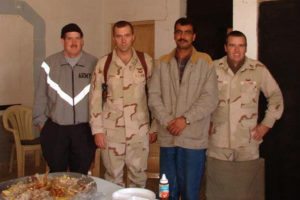 I was part of 101st Airborne’s general support for General Petraeus in Operation Iraqi Freedom in 2003. It wasn’t my first tour. In 1991, I was deployed to Desert Storm as part of the lead element of the 24th Infantry Division. Some of the things we went through weren’t fun, but the people were always good.

My global travels exposed me to a variety of people, cultures and customs. I worked with a college-educated electrician in Iraq who wasn’t a member of the military-supported party. He brilliantly designed our entire electrical grid, but because of his beliefs, he was relegated to tire maintenance. Another guy was a Christian in a Muslim country and would have been killed, if exposed. I still remember how thrilled he was to be lifted on a fork lift. It was so basic to us. Then, there was the joy in the local children’s faces when we gave them a Kit Kat. We take so much for granted.

Next, I was assigned to a topographic engineering company that was responsible for airfield surveys. Promoted to Company First Sergeant, I was assigned to the Apache Attack Squadron handling all maintenance work. Then, I moved across post to a general aviation company which flew Blackhawk Helicopters where I directed the ground maintenance fleet.

There was plenty of opportunity to be hurt. We did jobs we weren’t supposed to do … at times we weren’t sure we could do it, but we did. But, it was always about the people.

While recuperating from a ruptured appendix during Desert Storm, I was laid up for two months, away from my unit. I once heard a soldier on TV describe a stint in the military similar to being a father of two families. You have one family here in the U.S. that is safe, and your other family is deployed and in danger, and you want to be there. That’s exactly how I felt. 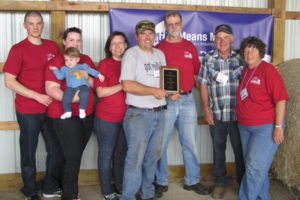 Kevin Weber and his family hosting a county farm tour.

The military mimics life in many ways. You’re bringing every kind of viewpoint together regarding politics, race and more. For us, none of that mattered. We always worked together. Our idea was to get everyone going in the same direction. I keep in touch with my military unit through Facebook. In the military, it wasn’t a job I always liked, but I got to work with good people.

Veterans Day Post written by Kevin Weber of Leslie, Michigan. He and his wife Joan have three grown children. Kevin farms with his oldest son on their 70-cow dairy farm 20 miles south of Lansing.